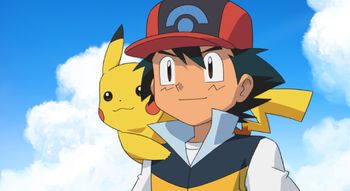 Ash's shoulder would be killing him by now.
"She flaunts it on her shoulder, like... like an exotic bird! By tonight, all of Paris will be wanting one!"
— Miss Sofie (about Agatha's wasp weasel

Both the Pirate Parrot and Shoulder-Sized Dragon are found in this position.

In Real Life this can be somewhat dangerous with larger parrots, since they like to nibble things and it tends to put their beak at eye-level. With trained birds of prey such as hawks and falcons, it is borderline suicidal — Go for the Eye is a natural predator instinct that cannot be wholly suppressed, perhaps explaining all those pirates with eyepatches. Hunting birds should always be held away from the face or perched on a staff or pole.

Compare Head Pet, Feather Boa Constrictor. For (tiny) people being carried this way, see Shoulder Teammate. Hopefully has nothing to do with the position of a dead Norwegian Blue parrot.