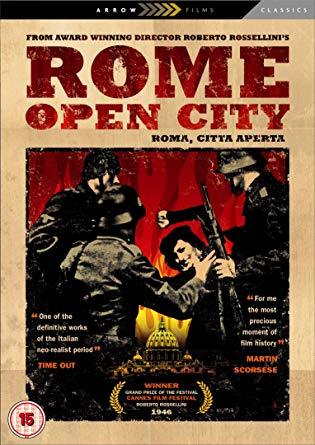 Rome, Open City (Roma città aperta) is a 1945 Italian neorealist drama directed by Roberto Rossellini. It is the first film in his War Trilogy, the others being Paisan and Germany, Year Zero.

The film takes place during the German occupation of Rome, specifically January-May 1944, judging by the reference to the battle of Monte Cassino. Giorgio Manfredi, an engineer in civilian life, is now part of an Italian resistance group. The Nazis know about him and are hunting Rome for him, so he escapes to the apartment of his friend Francesco, who is also part of the resistance. Francesco is about to marry Pina, who is carrying his child.

Giorgio was supposed to smuggle some money out to resistance fighters in the hills, but can't leave the city now that the Germans are looking for him. He approaches Don Pietro, a sympathetic priest, and asks him to do it. Don Pietro agrees...but the Germans are closing in Giorgio's little ring.