Film / Planet of the Dinosaurs 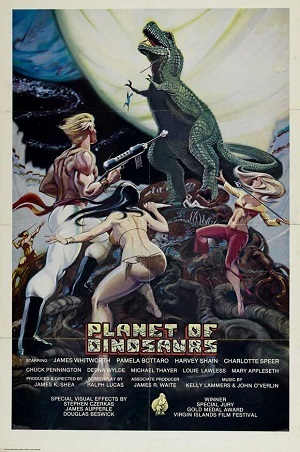 Planet of the Dinosaurs is a 1978 science fiction film. Set in an unspecified future, the film follows the journey of Captain Lee and his crew after they crash land on an earthlike planet, but millions of years behind in time. Encountering a wide variety of dangerous dinosaurs, the crew decides that its best chance for survival lies on finding higher ground and setting up a defensive perimeter on a higher plateau until their rescuers arrive. They soon encounter a deadly Tyrannosaurus rex and must figure out a way to defeat the creature and survive on the planet.

The film was a low budget endeavor with no major stars; actors James Whitworth and Max Thayer have the most film experience amongst the actors. Director James K. Shea instructed most of the budget to be spent on the special effects for the film, which included an array of award-winning stop motion dinosaurs, leaving little money for props or even to pay the main actors, all of whom seem to have been chosen based on how sexy they look in tights. Modern reviews have generally been negative, although there is agreement that the stop motion dinosaurs were the most notable and enjoyable aspect of the film.

Was made into a RiffTrax in 2009. Not to be confused with the 1992 Italian documentary of the same name.