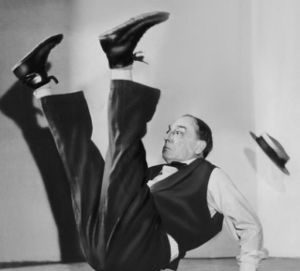 The buttocks. The fundament. The behind. The posterior. The sitter-downer. Whatever you call it, it's inherently funny. Falling down and landing on it? Comedy gold!

The Pratfall (named for an archaic word for buttocks) is a staple of Slapstick humor and one of the most fundamental forms of Schadenfreude. Many comedians have built entire careers around variations on this theme. A stock gag for the circus clown, the pratfall is Older Than Radio and dates back at least to the days of vaudeville and music hall theater, and it was very popular in early silent films. It may well be as old as comedy itself. One suspects even our primitive ape-like ancestors must have found it hilarious when a fellow ape sat down a bit harder than expected.

The humor often comes from the exaggerated nature of the fall, and many physical comedians practice their pratfalls carefully to make sure they are funny enough. (Online lessons are available.) The humor value may also depend on what the falling character lands on (or in).

A favorite technique for The Klutz. May involve a Banana Peel, dog droppings, or just a slippery surface.

Subtrope of Amusing Injury and Literal Ass-Kicking. Compare Face Plant, which is a similar way of going from upright to sprawled very quickly for humor, the closely related Face Fault, and Forgot to Mind Their Head, where humor can be achieved by hitting one's head on something.