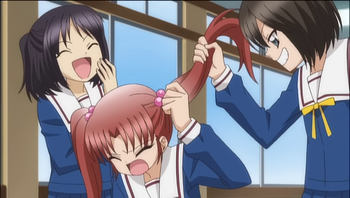 School bullies giving a new meaning to having a bad hair day.
"If life were to suddenly get fair, I doubt it would happen in high school."
— Will Stronghold, Sky High (2005)
Advertisement:

It seems fictionland is inhabited by the worst bullies in existence, always ready to mock you and steal your lunch money, no matter what happened to you, you'll always be different from All of the Other Reindeer. Not even the Littlest Cancer Patient gets a break. Especially not the Littlest Cancer Patient. After a while, it looks like we have a society of youthful sociopaths running around the city. Oh wait...

Note that the victim is almost always the protagonist; at least fictionland doesn't think bullies are good protagonist material... unless they can grow a stubble, that is. In Teen Drama, the Alpha Bitch and the Jerk Jock represent this trope. One way to defuse the abuse is for the kid to make his aggressors realize what they're feeling. This only works if the mean kids are good but misguided though, if they aren't, then a beatdown is in order.

If the target of abuse could easily rip them apart if it wanted and the kids know it, then they're Bullying a Dragon (not to mention Too Dumb to Live). And even if the target of abuse is not superpowered at the time, just wait until the Bully Magnet who Used to Be a Sweet Kid undergoes a Start of Darkness, possibly as a result of the cruelty of other kids, and goes on a Roaring Rampage of Revenge, often at a point when the bullies themselves have forgotten the whole thing.

A favorite for films with grown protagonists is to reveal this as part of their Back Story via Flash Backs.

See also Teens Are Monsters, Big Brother Bully, and Humans Are Bastards. Contrast Children Are Innocent. The Royal Brat is a particularly disturbing take on this. The Psychopathic Manchild combines this trope with being a physical adult, having a 'grown-up' with a childlike cruelty to them. Adults Are Useless for when the majority, if not, all the bullying occurs all the time because the adults ignore it, are oblivious or, in a few extreme instances, actively encourage it out of a sadistic desire to see the victim suffer. Cruel kids are usually the main cause of the Badly Battered Babysitter and Dreaded Kids' Party Entertainer Job, and are also part of why Middle School Is Miserable.

Sometimes leads to Would Hurt a Child. But all too often the bullying has catastrophic consequences.

Of course, one of the causes of this trope in real life is explained in Developmental Psych. It's called ego-centralism and until a child reaches a certain point in their mental development they don't understand that their actions can hurt others even though they are not hurt themselves. Unfortunately, another cause of this trope in real life is that a child who fits the trope is often himself being bullied by his parents or by some other adult authority figure.

It should be worth noting, however, that not all Kids are Cruel, and there are in fact some out there who show shades of Children Are Innocent territory due to naturally being in need of adult protection and maintaining a good-natured demeanor.