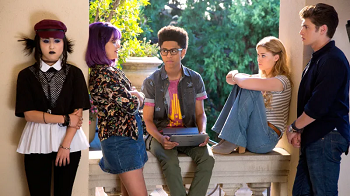 Devi: No, man. We're watching Riverdale. Buckle up for some steamy teen romance.
Kamala: These are high schoolers? And their parents are okay with them taking showers together in their homes?
Devi: Yeah, Kamala. Welcome to American teen soaps. The actors are also older than Mom.
— Never Have I Ever
Advertisement:

Any show where the central focus is on teenagers, their angst, pimples, and/or clothes. Best describes shows like Beverly Hills, 90210 and Dawson's Creek (or anything else on The WB or The CW, really). Most likely place to find the Very Special Episode.

The kind of show where everyone's too old and too short to be teenagers, they have to bring new people in, the men keep taking their shirts off, there are no more than two non-white main characters, the teens talk much more like adults than teenagers, and anyone over a specific age is bad news.

See also Kid Com which also features teenage protagonists and many of the same tropes, but generally in a far more light hearted manner. Young Adult fiction is the rough literary equivalent of the teen drama. Compare Soap Opera and Prime Time Soap.

When the lens is reversed to focus on the flaws of the kids' entire families, it's Stepford Suburbia.

See Tween Drama for the child-friendly equivalent to the Teen Drama.