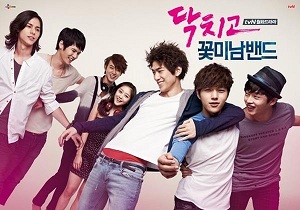 Meet Eye Candy, a six-member rock band, led by Joo Byung Hee. They're the Big Man on Campus of delinquent Dongnae High School. Due to Seoul rezoning, they've been moved over to the better, cleaner Jeongsang High. Jeongsang has its own Big Man on Campus rock band Strawberry Fields led by rich and popular Yoo Seung Hoon. Naturally, Strawberry Fields become rivals to Eye Candy. The rivalry is heightened by the fact that both Byung Hee and Seung Hoon have fallen in love with Su Ah.

Part of tvN's "Oh! Boy Project," Shut Up Flower Boy Band (known internationally as Shut Up and Let's Go) is a 2012 Korean Drama is a Coming of Age Story that deals serious themes of friendship, death of a loved one, and music. And it has a cool soundtrack!