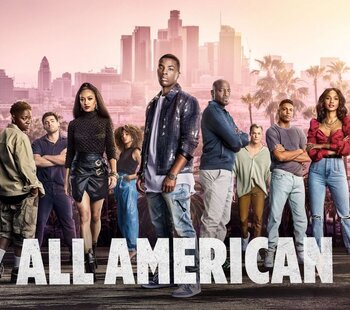 From left to right: Tamia "Coop" Cooper, Asher Adams, Olivia Baker, Patience Robinson, Spencer James, Billy Baker, J.J. Parker, Jordan Baker and Layla Keating.
"Take it from me, my experience. Every player out there is just one injury away from needing a backup plan."
— Billy Baker
Advertisement:

All American is a 2018 drama series airing on The CW, inspired by the life of retired NFL football player Spencer Paysinger

Gifted football player Spencer James (Daniel Ezra) is a star player at his local high school in South L.A., but his home city is plagued by gang violence and poverty. Billy Baker (Taye Diggs), the coach at Beverly Hills High School and former NFL player, recruits him to play football for the struggling football team, and, with encouragement from his best friend Tamia "Coop" Cooper (Bre-Z), his mother Grace (Karimah Westbrook), and his little brother Dillon (Jalyn Hall), Spencer accepts the offer. But he's pulled between two worlds, his world back home in Crenshaw and the affluent Beverly Hills where he stays with Coach Baker and his family. Spencer tries to fit in at Beverly Hills High and not forget where he came from, but occasionally, both his worlds collide.

Notable for having a modest audience for the first season, and doubling that number when the show premiered its second season on October 8th, 2019, no doubt helped by the first season being placed on Netflix. Four seasons have been aired, and a fifth has been greenlit.

In December 2020, it was reported that The CW was developing a spin-off of the series, which was then officially picked up in February 2021

. Titled All American: Homecoming, it is centered on Jordan's girlfriend, Simone Hicks (Geffri Maya), who began to recur in the second season. The backdoor pilot aired during the series' third season.

All American contains examples of: