Series / All My Children 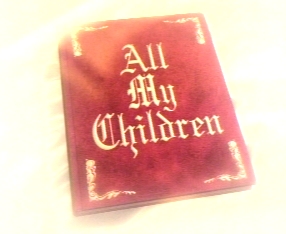 "The Great and the Least,
The Rich and the Poor,
The Weak and the Strong,
In Sickness and in Health,
In Joy and Sorrow,
In Tragedy and Triumph,
You are All My Children."
Advertisement:

The show was considered groundbreaking on many levels. It was the first daytime drama to feature a larger working class cast of characters, as well as the first major African American and Hispanic families in the cast, and touched upon many topics that were taboo, including the first legal abortion in television, protest of Vietnam, and one of the characters contracting AIDS. As well as social issues, the show broke ground on technical levels and was the first Soap in History to shoot outside the studio and on location, with Erica and Tom Cudahay's honeymoon in St. Croix, which sister series General Hospital would soon follow suit.

On April 14, 2011, it was announced that All My Children would be canceled. All My Children aired its last episode on September 23, 2011. Originally, a company named Prospect Park had purchased the rights to both One Life to Live and All My Children from ABC and was planning to continue the series either on a cable channel or possibly online. Those plans fell through, however, and when the show signed off, it was presumed that it was gone for good. In early 2013, however, Prospect Park announced that they would be bringing both shows back after all, with distribution through Hulu and other online video providers. Many of the major performers agreed to return to the show and shooting began in March 2013, with the premiere on April 29, 2013. Unfortunately, due to a combination of factors, the series was again cancelled, this time for good, on November 10, 2013.

that a prime time revival of the series, tentatively titled Pine Valley, was in development by Andrew Stearn and Robert Nixon (son of the late Agnes) as well as former stars Kelly Ripa and Mark Consuelos. The new series would follow a "young journalist with a secret agenda" who goes to investigate the dark history of the town and becomes entangled in a feud between the Kane and Santos families. It's expected that at least some of the former cast (including Ripa and Consuelos) will make appearances. The tone of the series is also expected to portray a heightened version of the soap genre, akin to how Jane the Virgin was inspired by the telenovelas it was based on.