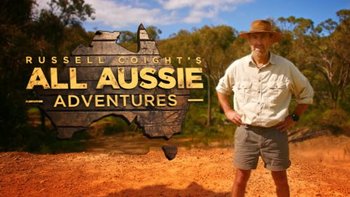 Russell Coight's All Aussie Adventures was an Australian mockumentary TV Series, a parody of the travel-adventure genre, created by Working Dog Productions. It ran on Network Ten for thirteen episodes over two series, from August 2001 to September 2002. A telemovie, Russell Coight's Celebrity Challenge, followed in 2004.

Russell Coight (a technically uncredited Glenn Robbins) is a self-proclaimed "outback man" who travels the outback in a four-wheel drive, sometimes transporting tourists or helping out mates, and always causing some kind of disaster in the process.

After being off the air for almost 14 years, the show returned for a third season in 2018.