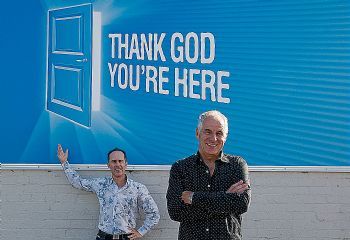 Thank God You're Here is as an Australian TV show from Working Dog Productions, in which several famous actors have to improvise their way through a random situation. Hosted by veteran Aussie actor Shane Bourne, each episode of the Australian original features four prominent members of the Australian entertainment business thrown into bizarre scenes. The performer is dressed in an appropriate costume, sent through a blue door into a small set where they are greeted with the words "Thank God you're here" and expected to completely make up their names, answers to questions, songs, speeches, ideas etc., often with hilarious results.
Advertisement:

They are then judged by Tom Gleisner, who always manages to give everyone a high score.

Once every performer has done his or her situation, the entire cast is thrown in to one last scene together for the All-In Group Challenge. The cast usually end up playing idiots or Jerkasses, or frequently both, just for the humour in watching them justify it. Occasionally, the performer will never try to justify any horrible thing their character did, and will just be even worse. It's always hilarious.

Good performers often create ridiculous lines like, "My grandfather actually lost a leg in the war. It wasn't his, he was a medic." or in an All-In Group Challenge where they were Vikings:

Ken the Conqueror: It slices, it dices. But wait there's more. It also works as a — Ken?
Ken Who Tried to Conquer Some Stuff But It Didn't Work Out: Killing thing.
Ken the Conqueror: So when you're attacking by the enemy, don't stab him, slice him and dice him, pop him in the freezer and have him a bit later on.

The fourth season ran on a different network after a year-long break on the part of the producers. The show has been sold to 13 different countries, with results varying wildly.

In which Frank Woodley and Ed Kavalee get very close.

In which Frank Woodley and Ed Kavalee get very close.