No Longer with Us 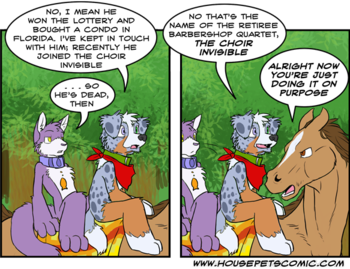 When Made of Win gets tired of a Hurricane of Puns...
I still remember the last thing my grandfather said before he kicked the bucket.
He said, "Watch how far I can kick this bucket!"
— Classic joke, source unknown
Advertisement:

A standard comedic misunderstanding, in which Alice announces that Bob "is no longer with us", "has moved on", "was transferred upstairs", "joined the silent majority" etc. Considering how many euphemisms for death there are in modern language, everyone naturally assumes that Bob has died. Turns out, Alice was speaking literally and Bob has just left for work, earned a promotion, or gone on vacation. He's in a better place — Palm Springs.

Sometimes Alice does this for intentional dark humor (the other characters are usually not amused), but if she's enough of a ditz, or she's picked up the Idiot Ball, she'll often have no idea why the others are so shocked. I mean, isn't "The Silent Majority" A Good Name for a Rock Band? And Bob's lead guitar!

A lesser used inversion is that Bob really is dead, but the listeners don't pick up on Alice's euphemisms. This is usually less comedic and more tragic, but not always.

See also Never Say "Die", He Didn't Make It, and Double Speak. Particularly crazy examples (think the Monty Python's Flying Circus Parrot Sketch) can cross over into Unusual Euphemism and Hurricane of Euphemisms. May involve a Rear Window Investigation. If the character is still around but the "euphemisms" suggest he's going to die, it overlaps with Mistaken for Dying. A Premature Eulogy may result. If the character himself tries to set the record straight, the others may respond "Not Now, We're Too Busy Crying Over You." If the character applies this trope to themself, it might be combined with That Man Is Dead. If the terms "dead", "murdered" or the like are being used to describe something innocuous, this also may count as an Unusual Dysphemism.

Subtrope of Un-Entendre and Reports of My Death Were Greatly Exaggerated. Sister Trope to Released to Elsewhere, which uses the same sort of euphemisms intentionally to cover up a death.