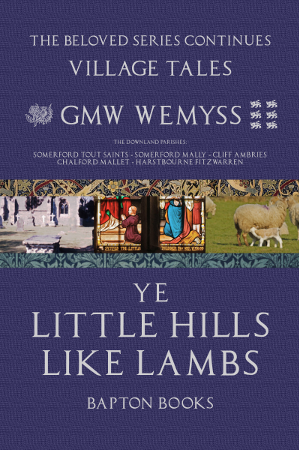 The fourth installment in the Village Tales series, published in the last quarter of 2016, and chronicling events in the first half of that year, against a backdrop of Ripped from the Headlines events, including the Brexit Referendum

and the embarrassing public collapse of Operations Yewtree

Ye Little Hills Like Lambs shifts the focus to the Downlands: of which the ecclesiastical parishes have been newly joined to the old Woolfonts Combined Benefice under the saintly Father Paddick (now a Very Youthful Canon), and the civil parishes were already next on the list for being Brought Up to Scratch by the Duke of Taunton.

Things start out peaceably enough: the panto season runs its course; Professor the Baroness Lacy and Professor Farnaby and their team are eager to get back to their archaeological survey when Springtime comes around (they think, as of the preceding volumes, they may have a found something bigger than Duropolis

; Teddy-and-Edmond are looking to adopt; the Duke is determined to recreate the old Georgian canal across the Downlands....

But in the Vale, adjoining the Downlands, and across the border in Dorset, suspicious things have been going on with the children of the appalling Gladdie Rideout; the ad hoc Dorset Department of Child Disservices (an interim taskforce, headed by an ambitious Obstructive Bureaucrat, until the real Multi-Agency Safeguarding Hub comes on line) is running loose; the Moral Guardians, unable to get local and legal camboy Luke Revel banged up down the nick, are looking for new targets; and the prissy, child-loathing, independent scholar John Treasure Voss is working on yet another book about Lewis Carroll.

Then there's a death in the Rector's extended family, and this unkeys the avalanche.

Notable for, among other things, the Duke's spending a good deal of time being a complete bastard: partly tactically, but also because his highhandedness is becoming habitual as he turns 54; and for how this, and the problems of some other sufferers from mid-life crises, gets resolved.... Also includes some Startling Revelations of some details of wartime whispered deeds done by the duke in his days in military intelligence.

This being part of the Village Tales series, justice, mercy, and redemption do, eventually, triumph … in a bittersweet sort of way.

open/close all folders
Tropes A through F
and
As JP, from the Bench, when the solicitor for the accused demurs to a ducal remark: "Of course there's a criminal class in the country. There are at least two, in fact. We do, in this country, after all, possess both parliamentary political dynasties, and … an hereditary peerage."
Tropes G to Znote "Zed," of course, this being a Terribly British series.