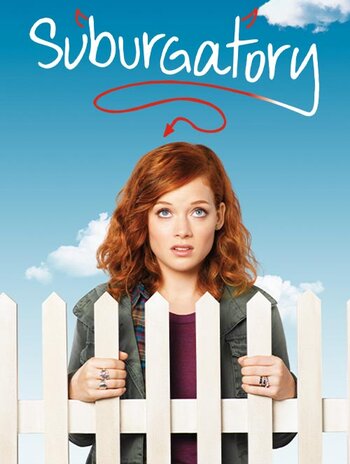 Suburgatory is an ABC dramedy from Emily Kapnek, formerly of As Told by Ginger (also created by Kapnek) and Parks and Recreation. The show premiered in September 2011, airing on E4 in the UK/Ireland alongside ABC in the US, and ran for three seasons before being cancelled in May 2014.

The show revolves around sixteen-year-old Tessa Altman (Jane Levy) and her father George, who have just moved from New York City to the affluent suburb of Chatswin. The series begins not long after Tessa's father searches her room, finds an unopened box of condoms (they weren't even hers!), and promptly has a seizure. He decides to get them both away from the city so he can give her a better life, and what better place to get away to than suburbia?

Tessa takes this as well as you might expect, believing deeply that she's now a Fish out of Water ripped away from her perfect NYC life and planted into a version of hell. Although the town boasts some strange characters immersed in the cookie-cutter white-picket-fence lifestyle, both her and George learn to navigate suburban life with the help of some of its residents.

The series took some inspiration (mostly the title) from a memoir by Linda Keenan, Suburgatory: Twisted Tales from Darkest Suburbia.

Now has an incomplete character sheet.