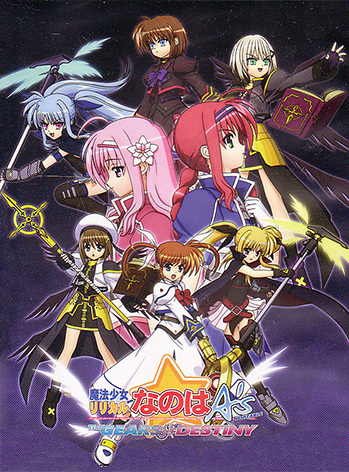 Magical Girl Lyrical Nanoha A's Portable: The Battle of Aces is a Fighting Game, developed by Witchcraft — composed of the people who made Wild ARMs — and released for the Playstation Portable by Namco Bandai in 2010.

As the name suggests, it's based on the Lyrical Nanoha franchise, specifically the second season Magical Girl Lyrical Nanoha A's. It is set in an Alternate Timeline where Reinforce was not deleted at the end of the series. Because of this, the corrupted defence program of the Book of Darkness soon returns, shedding "Dark Pieces" that take the form of Evil Knockoffs of the main cast. At the head of this clone army are the "Materials" — three super-powerful clones of Nanoha, Fate and Hayate who have gained sentience.

A sequel, Magical Girl Lyrical Nanoha A's Portable: The Gears of Destiny, was released for PSP on December 22, 2011. It takes place three months after The Battle of Aces, starting when two mysterious warriors arrive from the future. One of them is searching for the revived Materials, while the other is trying to stop her.

Meanwhile, the Materials have grown from the one-dimensional Omnicidal Maniacs they were in the first game and are searching for something called the "Unbreakable Dark", which seems to be linked to a whole new outbreak of Dark Pieces. Not only are these new Dark Pieces twisting time and space, pulling people from the past and future to the present age, but they are capable of copying long-dead people from the memories of the mages involved.

The Materials have become Breakout Characters, appearing as major and/or main characters in other media. They also get their own manga

The Materials, Florian Sisters, and U-D, also appear in the third and fourth Lyrical Nanoha movies, titled Magical Girl Lyrical Nanoha Reflection and Detonation respectively, which are loose adaptations of the Gears of Destiny storyline.

Playable characters introduced in The Battle of Aces

Playable characters introduced and added in The Gears of Destiny

open/close all folders
The Battle of Aces

The Battle of Aces provides examples of:

The Gears of Destiny

The Gears of Destiny additionally provides examples of: