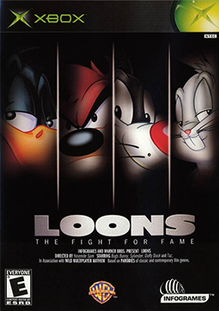 Loons: The Fight for Fame is an Xbox exclusive fighting game based on Looney Tunes. It is inspired by the Power Stone franchise and players can play as either Bugs Bunny, Daffy Duck, Sylvester the Cat or the Tasmanian Devil. These loons are getting ready for a spot in a Hollywood production by Yosemite Sam, the film's director and Rocky and Mugsy, the producers.