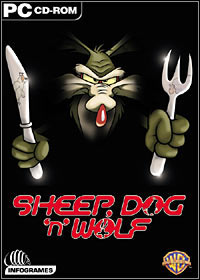 Ralph Wolf is truly hungry for sheep.
"Now, the aim of our game is simple: to steal sheep!"
— Daffy Duck
Advertisement:

Sheep, Dog 'n' Wolf, also known as Sheep Raider, is a mixture of a Puzzle Platformer and a Stealth-Based Game, based on a relatively obscure Looney Tunes cartoon series Ralph Wolf and Sam Sheepdog. It was released on the original PlayStation and on PC.

After another day of unsuccessfully trying to steal sheep from Sam Sheepdog, Ralph Wolf comes back home and decides to relax by watching some TV. Suddenly, Daffy Duck bursts into his house, declares him a new contestant in his show called "Sheep, Dog 'n' Wolf", throws him into his fancy limousine, and from there, Ralph's task becomes stealing all of Sam's sheep - this time successfully and on camera.

Throughout the game, you'll be using all sorts of wacky items and methods of acquiring sheep from Sam, all in the unmistakable Looney Tunes style. Hiding in a bush and moving while Sam isn't looking? Check. Flying with a rocket attached to your back? Check. Using an elastic rope to spring yourself across a bottomless pit? Check. The list goes on.