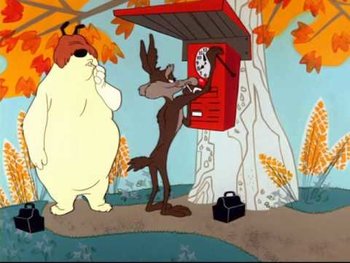 Directed by Chuck Jones, Ralph Wolf and Sam Sheepdog was a cartoon series in the Looney Tunes franchise, featuring the titluar wolf and sheepdog, who are just regular working joes punching a clock—except that Sam's job is a sheepdog guarding a flock of sheep, and Ralph's job is attempting to steal the sheep. Hilarity Ensues.

There is a licensed video game based on these shorts, called Sheep, Dog 'n' Wolf, which features Ralph becoming a game show contestant, as he attempts to steal sheep while avoiding Sam.