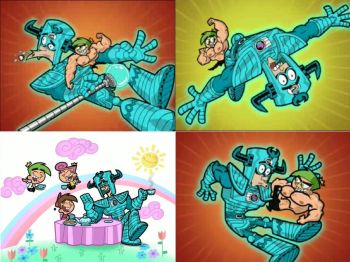 Mortal enemies, but they at least know how to have a good tea party in the middle of a fight.
"You know I just don't get these Britons; every time we get a good punch up going, someone behind the line yells "Tea's up!" and they all disappear!"
— Mark Anthony, Carry On Cleo
Advertisement:

Two adversaries are locked in brutal combat, and the tension is thick enough to cut with a knife. Naturally, the writers grab a knife and cut it.

In the midst of combat, the fighting will suddenly stop. All parties involved will turn around, take a few deep breaths, then turn around again and simultaneously resume fighting. Occasionally, the fighters will resort to something more nonsensical during the break, such as fixing their hair or yelling at a friend/sibling/teammate. A common cause is when a character crosses a joke version of This Is Unforgivable! - usually through burning a hole in the opponent's favorite jacket, a chopping off a chunk of hair, or, well... In those cases, the tea break takes the form of a "Dude, why did you do that?" (or, in the protagonist's case, "What the Hell, Hero?") Bonus points if the hero and the opponent do something fun together as part of the tea break. Ridiculously rich characters might take this even further by summoning a whole spread of tea party for a literal tea break.

As for the initiation of the tea break, one party may call a time out or some variant thereof. ("Hold on just a second.") If the tea break takes place in the middle of a Montage battle (especially parts of battles that are just a sequence of stills), expect the tea break to appear completely randomly and then end just as quickly.

Obviously a comedy trope. A Combat Pragmatist may grab a weapon or heal himself during such a break and launch an attack before the opponent realizes the break is over. See Anticlimax, where the fighting never resumes, Inaction Sequence, where a break in the fighting isn't for comedic purposes, and A Truce While We Gawk, where the fighting is interrupted by something that draws both sides' attention away from the battle. See also Uncomfortable Elevator Moment and Chaos While They're Not Looking, which can be a variations.

The duo take a break from fighting the AAHW to bag some new threads.

The duo take a break from fighting the AAHW to bag some new threads.