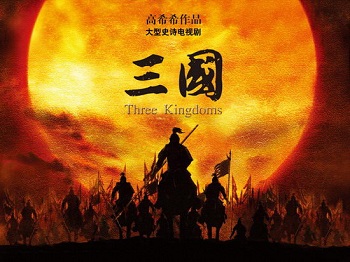 Three Kingdoms (Original title "三国", or San Guo) is a Chinese TV series made in 2010 and yet another work based on the Romance of the Three Kingdoms, though it also adapts personalities closer to the actual historical Three Kingdoms.

Probably the most expensive project ever made for Chinese TV, Three Kingdoms is a milestone of the Chinese media industry. Even longer than the much-praised 1994 TV series (95 episodes compared to its predecessor's 86) it tells a more character-driven story of the political intrigues, multiple betrayals, and fleeting loyalties of the turbulent Three Kingdoms era, and often strays from the original novel's (limited) characterization to humanize its main characters.

While the story begins with a focus on Cao Cao's ambitions and military rise, the other two factions - the honor-bound Sun family and the idealistic Liu Bei and his followers - are soon introduced, and their sides of the story told as well. The end result is an RoTK adaptation with a more balanced focus and carefully crafted characters which should appeal to newcomers and old fans alike. Of course, this is still RoTK; those who want to watch legendary heroes kicking ass Dynasty Warriors-style won't be disappointed either.

While the official release has fairly shoddy English subtitles, a fansub group has released the entire series subbed and downloadable by torrent.