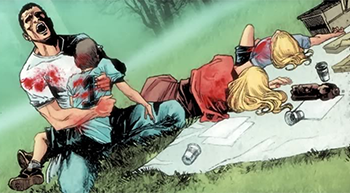 "Every living creature that directly shares your bloodline is dead."
— Vaarsuvius, The Order of the Stick
Advertisement:

An entire family has been targeted for murder in a single attack or systematically. This massacre may be carried out by a disgruntled family member, someone with a grudge against the family, or a complete stranger, and for many kinds of reasons, such as Feuding Families, a way to psychologically hurt their target, a way of making their target pay for not doing what they want, a bout of serial killing, specifically wanting to end their lineage, etc.

The devastation can be limited to a set of parents and their offspring (i.e, nuclear family) or target a much wider swath of lineage.

If there are any survivors, they are likely to carry a grudge, or even vengeance, against the killer(s) (if they know who the killers are).

Supertrope of Ruling Family Massacre, Pater Familicide. Compare Final Solution and The Purge for outright genocides. This can be the ultimate goal of a Familial Foe.

How Keyser Soze makes his reputation

How Keyser Soze makes his reputation