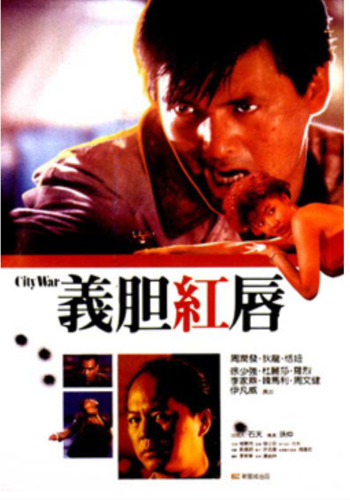 City War is a 1988 Hong Kong crime drama and Buddy Cop film starring Chow Yun-fat and Ti Lung. Released a year after the second A Better Tomorrow film, the two actors had somewhat of a role reversal this time, where Ti Lung is the hot-tempered, loose cannon cop, while Chow is his calm, level-headed partner.

Ken (Ti Lung) and Dick (Chow Yun Fat) are police detectives and partners whom have worked as a team for over a decade. Despite their differences in personalities where Ken is the trigger-happy hothead and Dick being the patient one, they remain close friends where Dick is regularly invited to Ken's home and dine with his family. Dick, still a bachelor, also had a crush on local nightclub singer Penny, which ends up being problematic because Penny's current boyfriend is none other than Ted (Norman Chu, former Shaw Brothers veteran actor), a drug dealer and weapons smuggler which Ken and Dick arrested and put in prison a decade ago. With Ted released from prison and now working for a mainland Chinese gunrunning triad, both Ken and Dick are now marked for death.