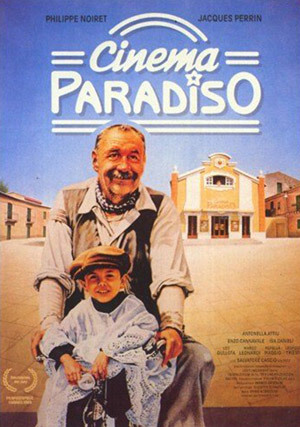 Cinema Paradiso is a 1988 film from Italy, written and directed by Giuseppe Tornatore.

It is a romantic drama about a famous Italian film director, Salvatore Di Vita, who recalls his childhood in the little town of Giancaldo. As a boy there he fell in love with the movies at the "Cinema Paradiso" theater, and formed a deep friendship with the theatre's projectionist, Alfredo (Philippe Noiret).

It also tells the story of his return to his native village for his friend Alfredo's funeral. Ultimately, Alfredo serves as a wise father figure to his young friend who only wishes the best to see Salvatore succeed, even if it means breaking Sal's heart in the process.

Re-released in 2002 in a Director's Cut version that ran 173 minutes. For tropes found in the director's cut, see the bottom of the page.

Tropes unique to the 2002 Director's Cut: