Just Got Out of Jail 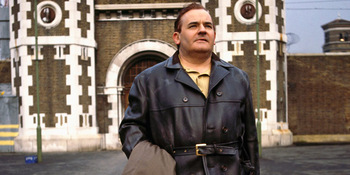 Judge: Mr. Natsume... I'm quite sure, if I'm not mistaken, that you swore an oath never to set foot in my courtroom again. I remember it as if it were yesterday.
Van Zieks: The day before, in fact, My Lord. But close enough.
— The Great Ace Attorney 2: Revolve, "The Memoirs of the Clouded Kokoro"
Advertisement:

Bob is on his way somewhere, when he gets dragged into a heist, shootout or other illegal activity. It doesn't matter if he's a hostage, an innocent bystander, or trying to stop the criminals, he just got out of jail, so he knows the cops won't listen to him. Or he knows they're corrupt. Either way, he's either a Retired Outlaw or just that much more determined not to get caught and never go back to prison.

Note that this trope applies to people who were released either on parole or due to their sentence being complete. Expect a Retired Gunslinger to be recently released about half the time. The same can be said of virtually any protagonist with a criminal background.

If a genuine villain just got out of jail, he is a Falsely Reformed Villain or Karma Houdini.