Film / The Art of the Steal 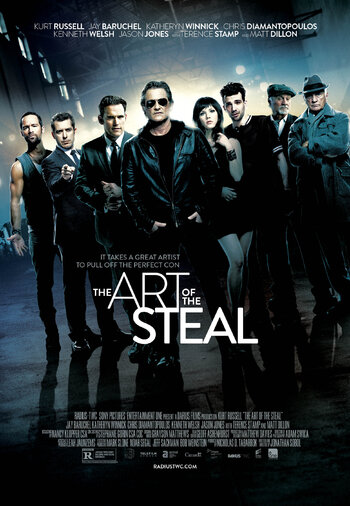 The Art of the Steal (a.k.a. Black Marks and The Fix) is a 2013 Canadian heist film written and directed by Jonathan Sobol. It stars Kurt Russell, Jay Baruchel, Chris Diamantopoulos, Matt Dillon, Katheryn Winnick, and Terence Stamp.

Crunch Calhoun is released after seven years in a Polish prison having been double-crossed by his half-brother Nicky following an art heist gone wrong in Warsaw. Barely scraping a living as a motorcycle daredevil, Crunch is tempted back into a life of crime by Nicky for One Last Job: the theft of a priceless historical book being held in a high security US-Canadian border station. Crunch reassembles the team from the Warsaw job and devises a plan, but Nicky also has a far riskier scheme in mind.

The Tropes of the Steal