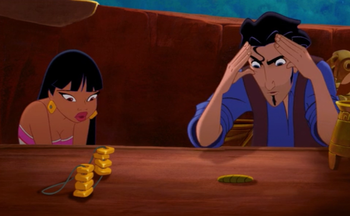 "Here's the gate, here's the boat..."
Cyrus: Considering my audience, I'm going to make this very quick, very simple. This is the boneyard, this is the hangar, this is our plane.
Thug: What's that?
Cyrus: That's a rock. [pushes the rock aside with a stick]
— Con Air
Advertisement:

A character is trying to outline a battle plan, a game plan or A Simple Plan. They will always use the first items that come to hand, and these will nearly always be salt and pepper shakers, a bottle of mustard or other condiments, and possibly tableware like spoons and napkins.

Can turn into a physical Metaphorgotten. See Exposition Diagram, The Big Board, Model Planning for when something more suited to the task at hand is used.