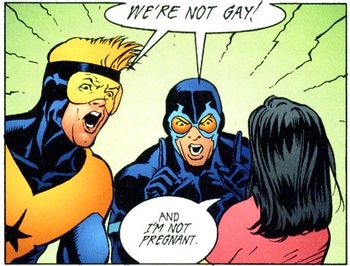 "... Not That There's Anything Wrong with That!"
Announcer: I am pleased to announce that there is no trace of the HIV virus in either Kyle Broflovski or Eric Cartman. Together these boys beat their illness. With nothing but each other, and overcoming all odds, these two brave friends...
Kyle: Oh stop! We're not friends! HE'S the one who infected me with AIDS!
(Beat)
Announcer: These two brave lovers found the cure and helped the world!
— South Parknote Just to clarify; Cartman was mistakenly given HIV+ blood in a tonsil operation, and Cartman used a syringe to infect Kyle as revenge for poking fun at him for getting what he deserved for his jerkassery.
Advertisement:

A comedy plot line in which a character wrongly believes another character to be gay, either because of misinformation received or because of the supposedly gay character's own misinterpreted words and actions. Once the character is taken to be a homosexual, all his words and actions become laden with innuendo and further misunderstandings, and humor ensues.

This can often be caused with supernatural secrets, such as superpowers or lycanthropy, which aren't immediately obvious, or various other embarrassing secrets.

Almost inevitable for Heterosexual Life-Partners. This plot may be the first time we've heard them explicitly say they're not gay (whether we believe them or not is another matter).

A slight subversion occurs when a character is suspected of being gay and takes this as a compliment, since that person deeply sympathizes with gay people.

For such characters to qualify, they have to be mistakenly assumed to be homosexual, even if the G, H, and L words are not used. However, these characters don't need to retaliate or tell those who have mistaken them that they aren't gay as such characters can easily disprove these mistakes through other means such as a revelation of a straight relationship.

See also Mistaken for Index. When the character probably is gay but is in denial, they're in the Transparent Closet. When the Character is heterosexual but acts like the Camp Gay stereotype they're Camp Straight. Due to the common belief that All Men Are Perverts and A Man Is Always Eager, any male character who isn't shown to jump at the chance to have sex with a woman will be mistaken for gay (if not actually gay) by the audience and possibly by the other characters as well (especially male characters).