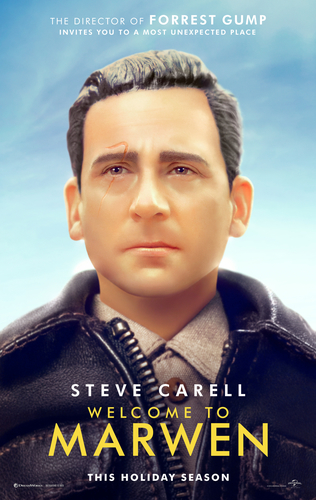 "They kicked every memory I ever had out of my head. Everything from before the attack is gone, so my dolls have to tell the story."
Advertisement:

A very strange hybrid live-action/animated film made by Dreamworks SKG.

Welcome to Marwen is an Urban Fantasy film directed by Robert Zemeckis, loosely based on the documentary film Marwencol and the true story of Mark Hogancamp.

After a near fatal beating by some local neo-Nazis, artist Mark Hogancamp (played by Steve Carell) is unable to draw any more or afford professional therapy for his brain injuries. He is inspired to create the fictional World War II Belgian town of Marwen in his back yard from everyday junk and populate it with dolls representing people in his life, including his attackers, which he then creates hyper-realistic photo dioramas with. The fictional world of Marwen becomes Hogancamp's own personal therapy to overcome the lasting effects of the attack.