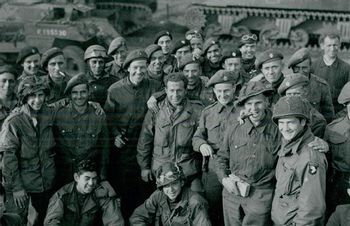 "Grandpa, were you a hero in the war?"
"No. But I served in a company of heroes."
"All for one, one for all..."
— Alexandre Dumas, The Three Musketeers
Advertisement:

If you were looking for the 2001 HBO TV series click here.

A Band of Brothers is a group of people, dedicated and loyal to each other beyond all other considerations, due to the dangerous (often combat-related) circumstances they have faced together. The spilling of their blood, mixed together with a desperate life-or-death struggle, make them a family as close as any mere blood tie can make them. Beyond mere comradeship, being a Band of Brothers evokes an ideal of grim determination to face whatever comes together, and to see it through together. It is in this shared struggle that they become a Band of Brothers.

Members of the Band of Brothers know that they can depend upon each other. Their relationship is often deeper than mere friendship. After one helps another in danger, gratitude is often dismissed with Think Nothing of It because "You would have done it for me." A similar concept is esprit de corps.

A Band Of Brothers is often formed after a Misfit Mobilization Moment. They are equally often a Badass Crew. See also The Power of Friendship, Blood Brothers, A Friend in Need, Fire-Forged Friends. Sometimes explains why the Mildly Military organization manages to remain efficient despite its apparent lack of regard for discipline and normal military procedure.