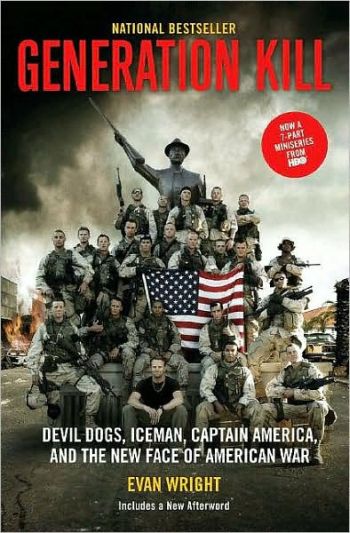 Get some!
"Wake up, Trombley. You're missing the invasion."
— Sgt. Brad "Iceman" Colbert
Advertisement:

In 2003, Rolling Stone reporter Evan Wright was embedded in the US Marine Corps' First Recon, for the onset of the War in Iraq. Over the next two months, he would have a firsthand view into the lives of some of the toughest men on the planet on the front lines of the The War on Terror as well as the command decisions that put them where they were. Wright compiled these articles into Generation Kill, which was later made into a seven-part miniseries by David Simon and Ed Burns on HBO.

The series and book are notable for their unvarnished depictions of the grunts' culture, including their views on the Marine Corps, the war, and their place in it. Marines espouse a wide variety of irreverent opinions using spectacularly coarse language and often revel in the opportunity to kill for their country. Many also grapple with the complicated moral footing they find themselves on as trained killers fighting a dubiously justified war surrounded by civilians who may or may not be the enemy. The command staff are frequently depicted as too incompetent or preoccupied with earning promotions to fight the war effectively.

All of this is a far cry from the noble, patriotic heroes audiences usually expect in war media. This triggered accusations that Wright's depictions were heavily embellished, but the Marines themselves have backed up their own depictions as mostly accurate.

As this pertains to a military operation, expect a lot of military tropes.

Tropes the series provides examples of: