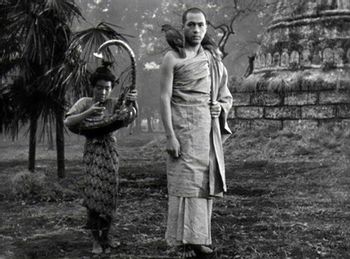 The Burmese Harp is a 1956 Japanese film directed by Kon Ichikawa. It opens in August 1945, focusing on a Japanese Army unit that is trying to escape to Thailand ahead of the British advance. Private Mizushima has acquired a Burmese harp that he plays while the men of his unit sing on the march. One day Mizushima's unit, led by Captain Inouye, is relaxing in a Burmese village when they realize that a British unit is advancing on their position. The squad starts singing to cover the noise while they form in combat formation—only to be answered by the British singing "There's No Place Like Home". Inouye's unit thus finds out that Japan has surrendered and the war is over.

The soldiers are in a POW camp when an Australian officer asks for a volunteer to go to another Japanese unit that is refusing to surrender. Private Mizushima volunteers and is sent out to the Japanese unit, with 30 minutes to talk them into surrendering. He fails, as the other unit decides to fight it out. The British attack, the Japanese unit is annihilated, and Pvt. Mizushima is presumed to have been killed along with them. Capt. Inouye and his men remain in the POW camp when one day, as they return from their manual labor duties, they see a very familiar-looking monk...

The Burmese Harp was nominated for the Academy Award for Best Foreign Language Film but lost to La Strada. In 1985 Ichikawa remade the film in color.