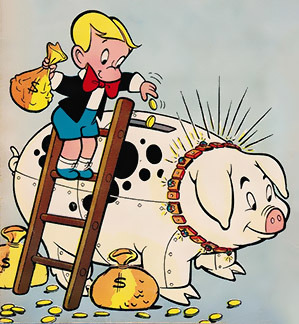 A stock symbol of saving money for a rainy day (or just saving money in general) is the good ol' ceramic Piggy Bank. It seems every child has one to store the leftovers from their allowance in... and whenever there's something they really want to buy with their money, the child will always, always fetch a hammer and proceed to, well, 'break the bank'. In real life, nearly all such banks nowadays have a removable stopper that can be used to extract the contents in a much safer (and more sustainable and less violent) manner, making that part something of a Dead Horse Trope. It is also possible to remove coins from a traditional piggy bank by turning the bank on its side and poking a knife through the slot, but this would be a slow process.

Piggy Banks often symbolize wealth and something a thief would go after in a cartoon.

One possible explanation for the association with pigs is the use of a type of clay called pygg for earthenware pottery, with pygg being mistaken for pig at some point.

The monetary storage item can also be in the shape of other animals; in Japan, the Maneki Neko is fairly common.