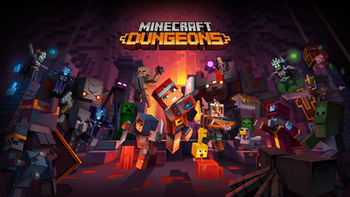 Minecraft Dungeons is an Action RPG Hack and Slash Spin-Off of Minecraft, developed by Mojang Studios and Double Eleven.

Shunned by his peers and everyone he encounters, a lone Illager ascends a stormy cliff face and discovers an ancient untouched cave. Inside lies the Orb of Dominancenote Actually a cube, naturally, a mystical artifact that grants the lone Illager the power to conquer the world and become the Arch Illager. With the world in chaos, you are tasked with restoring order and saving the world.

Minecraft Dungeons changes things up by putting you into an isometric action RPG game rather than a first person crafting/survival game, taking cues from similar titles such as Diablo and its assorted spin-offs, including randomized loot and unique loot to chase down.

The is also an Arcade version of the game, which works on a card-based system where every play gives the player one of five types of cards for building their character. The Arcade version uses a side-on perspective instead of an isometric perspective and plays more like a Beat 'em Up, but is otherwise similar to the home versions.

A prequel novel Minecraft Dungeons: The Rise of the Arch-Illager was published by Del Rey Books.

A new cousin called Minecraft Legends is releasing in 2023.