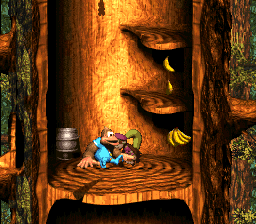 Kiddy and Dixie in the Wood.
It's so spacious in here! I can't believe we're inside a tree right now.
— Goombario, Paper Mario 64
Advertisement:

Simply said, this is when a video game leads your character to adventure through a gigantic tree. For whatever reason, the insides of the tree in question are hollow and carved just right enough for you to advance through, frequently by climbing up the whole thing. A common variant includes paths carved or built on the outer trunk itself, allowing the tree to be climbed from the outside, but not in the way most would expect.

This setting might be its own level or part of a greater The Lost Woods or Jungle Japes level. It might even lead to a Tree Top Town and is sometimes found in the Macro Zone. Common obstacles include tree-living creatures such as giant bugs (like spiders or bees), angry monkeys or territorial birds.

Compare Arboreal Abode, which is when an entire residence is found within a tree. It's possible for these tropes to overlap, in case your game features tree-living people whose homes can be entered.

Mario climbs up the tree of the Spring of Jungle Mist area.

Mario climbs up the tree of the Spring of Jungle Mist area.