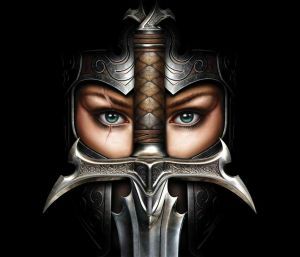 Valkarin: Religion is death...
Alita: ...and death to religion.
Advertisement:

Kult: Heretic Kingdoms or Heretic Kingdoms: The Inquisition (depending on where you live) is an isometric Fantasy Action RPG, released in April 2005. It was developed by Slovakian studio 3D People (subsequently rebranded Games Farm), with design input from International Hobo and writing by Chris Bateman (who also did Discworld Noir).

The gameplay of Heretic Kingdoms is not dissimilar to Diablo, Divine Divinity, Sacred, or Nox. Its storyline is more detailed and involved than some Action RPGs bother with, and focuses on a character named Alita (unless players rename her). Alita is an inquisitor-in-training in a world where God is Dead and the Inquisition is a militant atheist movement dedicated to suppressing all religion. It kicks off with the discovery that the special sword used by the hero who killed God (and who Alita is a distant descendant of) has been stolen.

The game has no relation to the Tabletop Game called KULT.

A sequel, Shadows: Heretic Kingdoms, was released in November 2014.