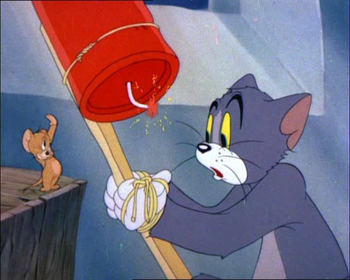 Tom is going out with a bang.
Lucas: This sucker is filled with 150 grains of black powder. AKA gunpowder. Strap two of these together, and it's bigger than an M-80. Five of them, we've got ourselves a stick of dynamite.
Max: You wanna kill that thing with fireworks?
— Stranger Things
Advertisement:

One of the wackier ways to cash in your chips, at least in cartoons. As fireworks contain many of the chemicals used in the manufacture of weaponized explosives, they can be a form of Improvised Weapon. In animated shows this tends to backfire, with the user riding a rocket into the air, where it explodes into a firework shaped like the person who was riding it. Of course, they'll still be none the worse for wear because of Amusing Injuries.

This also covers fireworks accidents, even when it doesn't necessarily result in death. It's about the use, intended or not, of fireworks to cause serious harm.

This is Truth in Television. Every year people are killed and injured by accidents involving/deliberate misuse of fireworks. There are persistent efforts to restrict fireworks to organized displays only due to danger, accidents, misuse, nuisance, noise etc. There are regulations for consumer use such as in the Canadian province of Ontario, where the sale of fireworks is restricted to a few days before the holidays Victoria Day and Canada Day respectively. Pets are often traumatized by them and many pets are lost (bolting)/killed (by running into traffic etc.) by fireworks going off.

There's a chance these fireworks can be used as Chekhov's Gun, especially if they were used earlier. See also Flare Gun, which has its own trope. Compare Fantastic Fireworks, which aren't weaponized.