Series / A Scare at Bedtime 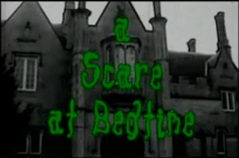 A Scare at Bedtime was an Irish Urban Legends/Horror show originally broadcast on RTÉ Two (called 'Network 2' at the time). It was created after RTÉ commissioned for something to fill the ten minute gap just before the eleven (at night) o'clock news created by the shortness of the show before.

Each episode concerned the two elderly puppet identical twin brothers Padraig Judas 'Podge' O'Leprocy and Rodraig Spartacus 'Rodge' O'Leprocy who live alone in a creepy old former insane asylum, Ballydung Manor (pictured to the right). Also living with them is an insane old nurse they call 'Granny' who is dating the devil and practicing black magic; and their diseased cat Pox.

A related talk show, hosted by the two brothers, The Podge and Rodge Show, ran between 2006 and 2010.

A Scare at Bedtime provides examples of: