Our Banshees Are Louder 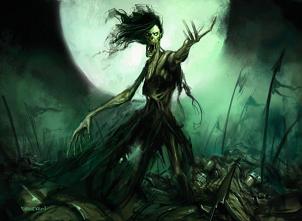 Many have heard the beginning of its low, sustained shriek but few the end.
"The banshee wails her horrible song! The bone-charring sounds rip your heart apart! You die..."
— Ancient Domains of Mystery, on being killed by the wail of the Banshee
Advertisement:

Here we have the ghostly women who originate from Celtic Mythology. They are usually noted for their voices, which are either hauntingly hypnotic wails, or blood-curdling screams. Traditionally, hearing a banshee wail is a Portent of Doom, though this is often Sadly Mythtaken for the wail itself being a sonic attack or Brown Note that causes death, which to be honest is a lot cooler and a lot scarier, and makes for a more active antagonist.

They are also prominent in Irish legends, where many of the more well-known banshee stories come from, as being a type of fairy typically connected to a single family. Believe it or not, their crying was actually due to mourning for members of the family who were already about to die, which often served to warn others of their loved one's death; if she's screaming at all, she's screaming in grief rather than as a threat and she herself means no harm, as it's only her job to warn the family. It was actually a privilege for a family to have a Banshee. There have been stories of banshees haunting families even as late as the 19th Century. And, as often in the original folklore, the fairy woman might be explicitly described as a ghost; The Fair Folk were a little unclear about the edges.

In modern fiction, along with the above-mentioned sonic attack, they are usually depicted as purely a type of undead or ghost, without a hint of The Fair Folk. A clue to their origin can be found in their name; bean sídhe can be translated as "fairy woman".

Alternative Title(s): Our Banshees Are Different