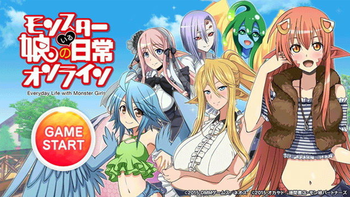 Daily Life With Monster Girl Online was a free-to-play browser-based Collectible Card Game with Ren Ai elements that takes place in the same universe as the manga of the same name, featuring monster girls and characters that debuted therein. The game launched in Japan in December 2015, and was hosted by DMM.
Advertisement:

Despite the surprising popularity of the source material outside Japan, the game had very little online presence, though the manga's author Okayado has drawn fanart of some of the characters.

The player took the role of a host family for the Interspecies Cultural Exchange Program, looking after a number of non-human guests, all of whom are female, as they learn to integrate into human society and possibly find love.

Gameplay was based around acquiring various character cards, all with different stats and abilities, through a gacha system and taking them on outings into town. During these outings, your party had to fight off hooligans and delinquents. Combat was mostly automated, though the player could cheer for their characters up to three times per battle, which can guarantee a Critical Hit or halve incoming damage.

While the game shared many elements with the manga, there are some differences, mainly caused by the lack of a dedicated main character and a slew of new characters.