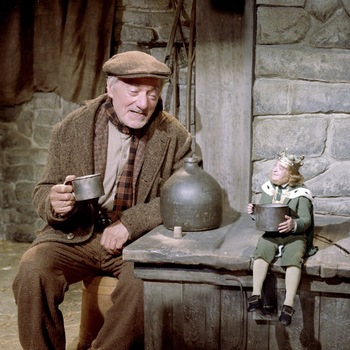 When you've seen The Quiet Man one too many times.
Advertisement:

Darby O'Gill and the Little People is a 1959 Walt Disney Pictures feature film starring Albert Sharpe, Janet Munro, Sean Connery, and Jimmy O'Dea, in a tale about a wily Irishman and his battle of wits with leprechauns. The film was directed by Robert Stevenson and is based on the books of Herminie T. Kavanagh.

The plot revolves around Darby O'Gill (Sharpe), an elderly caretaker who lives with his daughter Katie (Munro) in the Gatehouse of Lord Fitzpatrick's estate. Darby spends most of his time at the pub, telling stories of leprechauns, most notably King Brian (O'Dea), who is Darby's friendly rival.

Lord Fitzpatrick (Walter Fitzgerald) feels that Darby is past his prime as a laborer, so he replaces him as caretaker with the handsome, strapping young Michael McBride (Connery) from Dublin. Michael falls in love with Katie, which is all right with Darby; but the lad has a rival in local ruffian Pony Sugrue (Kieron Moore), the son of a devious widow who wants her boy to be the caretaker. King Brian's supernatural assistance is necessary to make everything come out all right, but the sneaky leprechaun won't play matchmaker without a fight.

A major source of Nightmare Fuel, due to the banshee. And possibly also because this is one of the only times, if not the only time, you will ever see Sean Connery sing on-camera. No, seriously, see for yourself

. Reportedly, it was Connery's role in this film that helped him land the part of James Bond in Dr. No three years later, after the Bond producers saw the fight between him and Kieron Moore at the end.