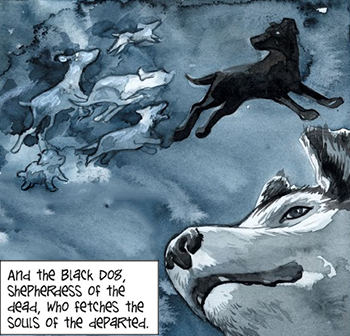 "In my culture, death is not the end. It's more of a stepping-off point. You reach out with both hands and Bast and Sekhmet, they lead you into the green veld where... you can run forever."
— T'Challa, Captain America: Civil War
Advertisement:

Death is a fact of life, fascinating, frightening, and ultimately mysterious. It's not so surprising, then, that every mythology in existence deals extensively with dying and the prospect of a world to come — a process often described in terms of a journey between this life and the next.

Greek for conveyors of the soul (and a title applied to Hermes), psychopomps are this journey's guides, and they are everywhere in mythology. Most cultures, ancient or modern, include at least one figure with this function; several have many. They are not necessarily personifications of death or judges of the dead, although many are; they may or may not choose the slain, but all escort their charges to the next world. If more than one appears, they may dispute over who gets the soul, which will determine the destination. Often they act as threshold guardian figures either to dead souls or to living heroes descending into the underworld. In many cases, it's common for burial rites to include an offering to the guardian of the gates of death. Their ability to cross between the lands of the living and the dead — they may be the only beings who can — may make them uncanny even among their kinds. Still, in any case, you don't need to fear these guys.

Like most mythological concepts, these figures have crept into present-day media; hardly a Bangsian Fantasy series leaves the concept unexplored, and most other fantasy settings at least touch on it. An increasingly prominent subgenre features the protagonists as psychopomps, either as their main job or as an important secondary duty.

Please add examples to this page only if they do not fit one of its subtropes.

For the next step up in the Celestial Bureaucracy, see God of the Dead.