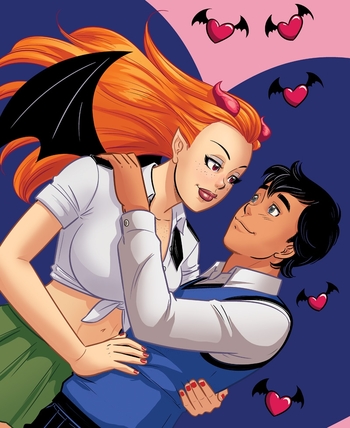 The second spin-off in the Eerie Cuties 'verse, sharing many of the creative team from that comic in variant roles, Dangerously Chloe

follows the exploits of the succubus Chloe Love (last seen in Eerie Cuties leaving to go to a new schoolnote in Hell after an incident with a pair of Doom Panties temporarily made her evil), who is summoned from Hell due to a misunderstanding with a museum "burglar" and a blood oath.

with 635 pages. It has twenty four chapters of varying lengths. A mirror can be found here

The art tends toward borderline R rated for lots the sex and nudity (Dear God does it have a lot; but, then, the main character is a succubus) but with lots of Censor Steam and Scenery Censor as well as Barbie Doll Anatomy, since most of the characters are under 18. Of the three Eerie Cuties comics DC has the most sexual situations, EC has the least, with Magick Chicks falling in between

This webcomic contains examples of…