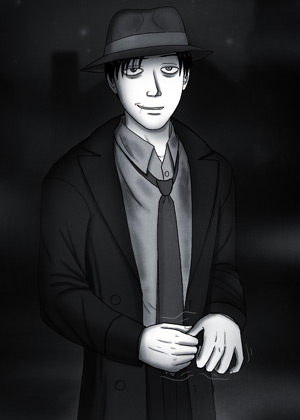 Daniel Groth: The main character and one vampire of the story.
Advertisement:

is a horror webcomic written and drawn by Sarah Nelson

, who has worked on other webcomics such as Vampire Phantasm and Cwen's Quest. It ran from 2012 to May 2020.

Set during The Great Depression, Daniel follows the story of Daniel Groth, who begins the story as a rather timid and insecure man who is a newly employed gravedigger. He seeks to finally tell his best and apparently only friend, Christine Lockwood, that he has been in love with her for some time. However, after the intervention of Christine's ex-boyfriend Wayne, Daniel's confidence is shaken and he decides not to tell her. He backs out of their plans to see a Fourth of July fireworks display and proceeds home after giving a gift to Christine.

Daniel mysteriously disappears right after this and isn't heard from again for three months, when he returns to Christine's house in the middle of the night, noticeably changed in personality and appearance. It is quickly revealed that he has somehow become a vampire and much of the story is Daniel fighting against his unrelenting Blood Lust.