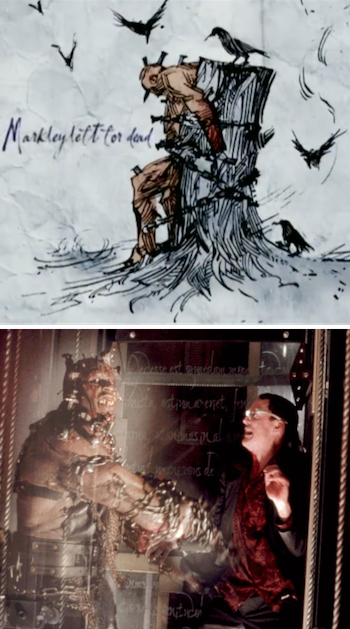 When all you have left is a hammer...
"When someone dies in the grip of a powerful rage… a curse is born. The curse gathers in that place of death. Those who encounter it will be consumed by its fury."
— The Grudge
Advertisement:

A theory that crops up often in paranormal studies and stories is that actions and emotions leave a sort of "residue" on locations. This concept is usually used to explain why a place is haunted, suffering from poltergeists, and whatnot: bad things have "stained" the place. And sometimes, it seems, bad things stain souls as well.

It's an old saw: someone is killed, often in an extremely cruel or vicious way, but they don't stay dead. Unfortunately, they don't stay themselves either. The actions that led to their demise have completely consumed them; all they want is to lash out at anyone they can, no matter how much or how little the person had to do with their demise. In a deeply tragic sense, they have suffered an even deeper, more final victimization; the murderer's deeds have corrupted them into something else. Sometimes you can reason with these poor — albeit dangerous — souls; sometimes they're just seeking revenge but striking out blindly...but sometimes they just want to keep inflicting pain. Madden Into Misanthropy has gone to its final, logical extreme: the person persists despite being dead, and all the entity wishes to do now is evil.

This trope only applies if the victim was a good or at least neutral person before their death. People who were monsters in life and remain so beyond the grave do not count.

Compare with the Vengeful Ghost and the vengeful variant of the Revenant Zombie: although they might be monstrous, they focus their anger on their killers. Those entities overlap with this trope if they aren't satisfied with avenging themselves on their killers, but also target innocent victims.

A Sister Trope to the Tortured Monster and to the Monster from Beyond the Veil. In some works, this makes undeath a form of The Corruption. Contrast the Non-Malicious Monster. Can overlap with Resurrection Revenge, which doesn't require the slain person to become malevolent.