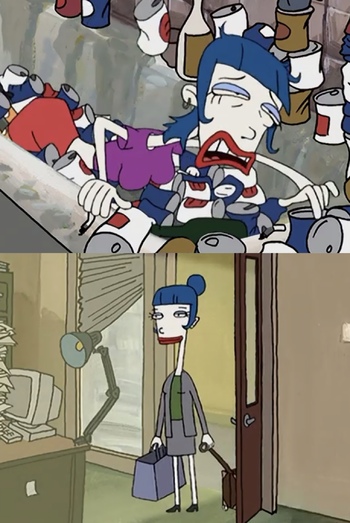 "Congrats — you're sober. It will take a while for your body to remember how to metabolize anything that isn't sugar from alcohol, so you're going to be pretty ravenous soon. Eat plenty. You can expect your coordination and balance to improve in a couple of weeks. In two months, you might start sleeping like a normal person. Full recovery will take years, though. It'll be depressing. And it'll be boring. Don't expect any further rewards or handclaps. This is how normal people are all the time."
— Waste Land of Reality, Disco Elysium
Advertisement:

The Recovered Addict is a former substance or compulsive behavior addict who has managed to beat their addiction. They have managed to go through the rounds of rehab and withdrawal and come out the other side without falling Off the Wagon immediately after. Then again, addiction recovery, being a long and sometimes painful and/or dramatic road, they might very well have fallen off several times before they figured out how to stay on the wagon.

The addiction in question may have been alcohol, other drugs, gambling, or another compulsive behavior. Weirder fare like sex addiction, cannibalism, videogame addiction, and blood drinking are also possible.

They may have been The Alcoholic, an Addled Addict or a Functional Addict who got wise and found help. One interesting Character Arc and story for these types of character is to start clean, get addicted, and then recover, with all the drama and pain that that implies.

Once clean they can go one of two ways: be outspoken about how Drugs Are Bad and their own past and possibly become The Teetotaler; or try to forget and live down their past and move on, making it Hidden Depths. They'll usually be sympathetic to the suffering of others and seek to help in overcoming addictions as The Sponsor.

The Manipulative Bastard will probably try to get them to relapse by offering or forcing them to do drugs or otherwise kicking them Off the Wagon. Friends who are still addicted will probably crawl out of the woodwork asking for money or trying to get them to come back. It's unfortunate, but sometimes they do succumb and relapse, starting the cycle over again.

Interestingly some vampires may be able to stave off their Horror Hunger and become recovered blood addicts; transitioning from bloodthirsty monster to Vegetarian Vampire.

See also The Sponsor and Addiction Displacement which frequently accompany this character. In optimistic works, this can be the endpoint of a Descent into Addiction character arc. See also: Off the Wagon for when they relapse.