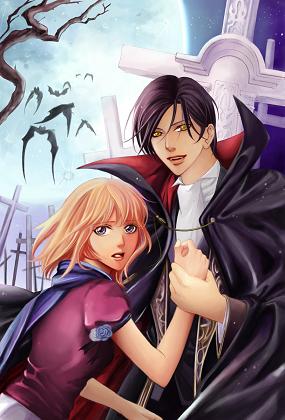 Dracula Everlasting is an original English language manga-style comic by Nunzio DeFilippis and Christina Weir (creators of Amazing Agent Luna), with art by Rhea Silvan. It tells the story of teen-aged Nicholas Harker, who after losing his parents to a car accident, learns he's the heir to a vast family fortune. But this comes with a price as he learns the hard way that Dracula was based on a true story, and he's descended from the Harkers of the story.

Nicholas is seventeen years old and just starting his senior year of high school. He is dark haired and at the start a little meek. He doesn't have as much confidence as he could and tends to blend into the background. When his parents die, he is left somewhat broken, an empty shell of himself. It is his friendship with Jill that gives him strength. And then he finds a Harker heirloom—a locket with the word "Everlasting" engraved in it.

Jill is the prototypical girl next door. She's friendly and kind but also very introverted. Raised in London, she proves herself quite adaptable when her mother uproots them and moves to Boston. Shy herself, Jill is really good at being a best friend, but that makes it all the harder when she actually realizes that she quite "likes" her new best friend. She's an avid reader and loves fantasy. She also descended from Van Helsing.

, Seven Seas Entertainment cancelled their Webcomics division, but continues to publish the volumes in comicbook form.