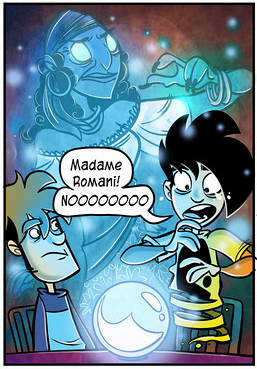 "Memo to self: never refuse to kiss the Queen of the Gypsies!"
— Jimmy Olsen, All-Star Superman
Advertisement:

A common occurrence in the horror movie is a curse laid down by a stereotypical Romani, often an old woman.

These curses come as a unique brand. They'll be done out of vengeance (usually seen by the victim as Disproportionate Retribution) but also as some Laser-Guided Karma that's being used as a morality tale. Hey kids, don't do that nasty deed because otherwise, one day, you might do it to someone who'll go totally apeshit and curse you! And the only way to get rid of the curse might be to pass it on to another person.

On the other hand, even when being used for that particular Space Whale Aesop, there seems to be a law of conservation of Gypsy Curses. The cursed person will find properly getting rid of the curse impossible but there will be some rule that allows them to transfer the curse onto somebody else like it's a forged banknote. As soon as the character finds this out, expect to have the next scene full of the most adorable, innocent looking people in the world for the character to try to pass the curse off onto.

This trope was often used to demonize the Romani, portraying them as revenge focused, not justice-focused, uncaring of collateral damage and inspiring selfishness in others. In other words, like a lot of supernatural stereotypes surrounding the Romani, it carries some pretty Unfortunate Implications. Also, don't ask about why these Romani slinging out curses are always portrayed as impoverished and homeless despite possessing amazing magical powers.

The Hand of Galachio is a manifestation of a curse on Raz's family that they all will "die in water."

The Hand of Galachio is a manifestation of a curse on Raz's family that they all will "die in water."