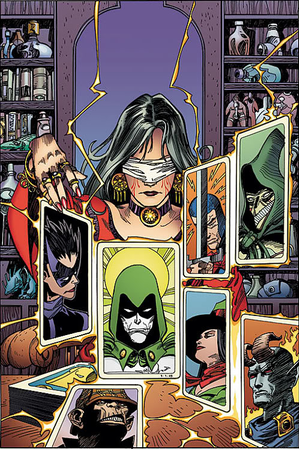 "Pick a card, any card..."
Advertisement:

This character often is a Hot Gypsy Woman if they're a Hot Witch, while fortune tellers are more likely to be mysterious old women.

May be a Discredited Trope, as it tends to stem from less-than-flattering ethnic stereotypes. There's some Values Dissonance to this trope as in some regions (such as the Americas), more specifically in regions without a large Romani population or history with Romani, they're often not viewed as an ethnicity and thusly this stereotype isn't usually deemed as offensive as other ethnic stereotypes.

Related to Fortune Teller and sub-trope to Ethnic Magician. Supertrope to Gypsy Curse (which they may cast). Compare to Magical Negro, Magical Asian, Magical Jew, and Magical Native American for other ethnic minorities associated with magic and/or wisdom. Sister trope to Roguish Romani. See Wandering Culture.