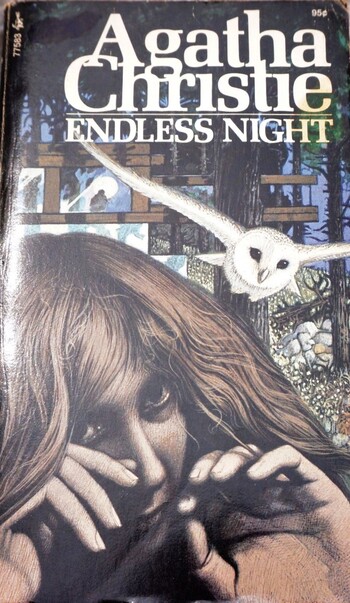 Endless Night is a 1967 novel by Agatha Christie.

It is one of her one-off stories that features neither Hercule Poirot nor Miss Marple. In this one the story is narrated by one Michael Rogers, a footloose young man temporarily working as a chauffeur. He stops in a rural village and admires a property called "Gipsy's Acre" (throughout the story the word "gipsy", now considered a slur, is used to describe the Romani). He is confronted by a spooky Romani woman, Mrs. Lee, who tells him that the land is cursed, and "There's no luck for them as meddles with Gipsy's Acre."

Yet Michael can't forget Gipsy's Acre, which he thought was the perfect place to buy a house. On his return to the village he meets Ellie Gutman, a sheltered young heiress. A whirlwind romance ensues, Michael and Ellie get married, and the extremely rich Ellie buys Gipsy's Acre. They build a house and settle down to a life of wedded bliss, but there are a couple of flies in the ointment. Michael is irritated by the continuing presence of Ellie's companion/governess Greta, who exerts an undue influence on the life of meek, submissive Ellie. Another problem is the continuing presence of spooky Mrs. Lee, who gives Ellie a palm reading and sees death...

The title is only metaphorical (more precisely, a Shout-Out to Auguries of Innocence by William Blake); this book does not feature the trope The Night That Never Ends.