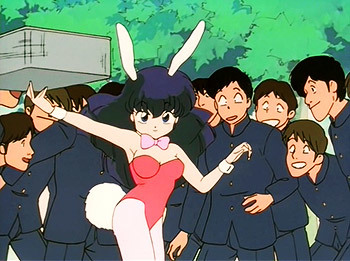 Ranma cleans up nicely, doesn't he?
"She can't help it if she's made that way
She's not to blame if they look her way
She ain't really tryin' to cause a scene
It just comes naturally
Aw, the girl can't help it."
— Mel McDaniel, "Baby's Got Her Blue Jeans On"
Advertisement:

This woman is sex on legs, and everything about her screams Schwiiinnng! She may or may not know it, but when she walks past, others take leave of their senses and devolve into a steaming mass of drool, totally consumed by lust.

In a funny cartoon, expect steam to shoot from their ears, their hearts beating so hard you can see them. For other shows, the leads will stutter and sweat; any charm they once had will dissolve in her presence. We'll also probably hear at least one Wolf Whistle.

She may be a sympathetic character, who is tired of being treated differently because of her appearance. She could be a ball-buster who uses her skills to seduce her way to whatever she wants. She might be smart as a whip or dumb as a post. Either way, she will probably only be a Flat Character. (Not that kind of flat.)

Of course, the only person she wouldn't mind drooling over her will most likely be a Chaste Hero.

Compare with Ms. Fanservice, who's meant to provoke the same reactions in the audience, rather than other characters. (There's considerable overlap, though.) See Chick Magnet and Even the Guys Want Him for the male version. Make straight females fall for her as hard as the straight boys, and she'll be a case of Even the Girls Want Her. A good portion of these characters are blonde and if so, may also be an example of Everyone Loves Blondes.

Closely related to and often overlaps with Lust Object. Or for the chaster version, you have World's Most Beautiful Woman. Also compare to Eating the Eye Candy. Contrasts with Girl Next Door.

Jerry Is Instantly Smitten With A Female Mouse - Tom And Jerry

Jerry Is Instantly Smitten With A Female Mouse - Tom And Jerry